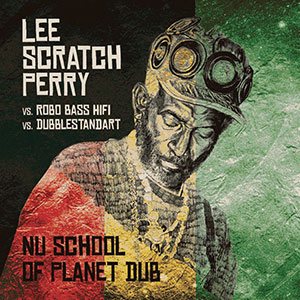 The Echo Beach label is known for its love of thick, modern dub and drifty reggae rhythms, and while Nu School of Planet Dub is filled to the brim with both, it’s a curio when it comes to Lee “Scratch” Perry‘s discography. The legendary dub producer’s contributions are merely vocals, mostly funky incantations or spirited damnations of Babylon, and all of them come from Return from Planet Dub, the 2009 album Perry cut with Austrian dub band Dubblestandart. Markus Kammann aka Robo Bass Hifi mixes the original cuts into dubstep and electro bangers, with “Fungus Rock” getting a bottom end somewhere between Burial and Skrillex, while “Island Girl” introduces the seductive and spacy sound of reggae-house. Ari Up‘s vocals on “Island Girl” are now just chirps that echo across the universe; then there’s director and odd choice David Lynch, whose contribution to “Chrome Optimism” is remixed into a “Pump Up the Volume”-styled vocal sample. Newcomers would do best to choose the original release over this grab bag of grooves, and that album already came with a bonus disc of remixes, so consider this the extra after the other extra, or maybe too much of a good thing.